Are Myrla and Gil From Married at First Sight Still Together? 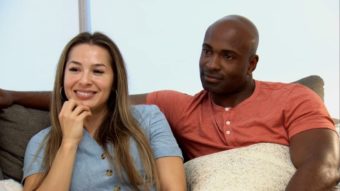 The start of Season 13 of Married At First Sight was not easy for most of the couples. Although there were reasons that the experts matched them all, the couple’s differences made it difficult for them to get along until the final week. Gil, Myrla , and Web aren’t exempted from these struggles.

Myrla voiced her concerns about Decision Day ahead of the MAFS episode on Nov. 10, 2021. She even takes the initiative to blame the experts.

They are responsible to match Myrla with Gil. Even though there have been some positive times, Myrla seems to be more focused on the negative aspects of their relationship.

Who are Gil and Mirla?

Myrla, a Texas-based 34-year-old leader coach, has been working in schools for more than a decade. She trusted the experts to find her the right match.

Gil, a 35-year old firefighter from Texas, also wants to marry, have children and live happily every day. He also enjoys salsa dancing.

The couple didn’t seem like they liked each other and were very slow to get along at the beginning of the series. Myrla refused to kiss him for several weeks and viewers were certain it wouldn’t work.

Gil threatened to divorce her for the lack of intimacy. He also complained about her many times, but they made it work and decided to stay married.

Myrla still isn’t sure about Gil on Decision Day on ‘MAFS.’

Myrla and Gil are filmed meeting with Dr. Viviana Coles and Dr. Pepper Schwartz. Dr. Pepper questions Myrla about any progress Myrla or Gil have made in reconciling their financial opinions.

Myrla is more inclined to spend extravagantly and earn as much as possible. Gil is content to live comfortably and not much more. Both are right, but they have very different ideas. Myrla said it “worries her”. Gil explains why he thinks so.

Gil says that the biggest difference in our financial situation is that she is money-driven, and I am not. “I am more driven by passion and what I enjoy doing. If I enjoy doing it, I will continue to do it. I don’t care about how much it pays.

Gil says that Myrla wants “the best she can”, and this is where the money problem between them lies.

Are they still together?

Gil and Mirla can’t reveal if they are still married until after the Married At First Sight reunion.

A popular Married at First Sight fan account, @MAFSFan has 75,000 Instagram followers and claims the couple are not together anymore.

Although it is not known who said this, @MAFSFan found a Gil tweet from May 2021. It stated: “When you really thought, that’s it.”

He was responding to a tweet saying: “Imagine falling for someone who doesn’t care about your well-being.”

@MAFSFan added that they were told Gil would bring his girlfriend to the Married At First Sight Reunion. These are rumours, however.