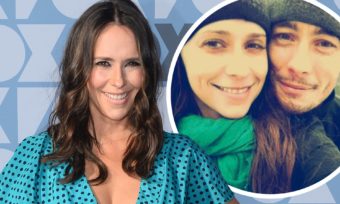 The 42-year-old actress and her husband Brian Hallisay announced in early September that they had welcomed their third child into the world.

And over the weekend both of them could be spotted in costume with another gentleman as they took the baby out in his stroller for his first Halloween.

Jennifer was dressed as what appeared to be a skeleton princess, as her outfit included shimmering robes and a black spiky tiara.

Meanwhile her dashing husband was dressed as one of the villainous stormtroopers from the Star Wars franchise.

Not only was this Sunday the baby’s first Halloween but it was also Brian’s 43rd birthday – an occasion his wife made sure to mark on Instagram.

Jennifer posted a heartwarming snap of her man grinning at her across the dinner table that evening before blowing out his candle.

‘Halloween was always one of my favorite holidays. And then I got to marry a Halloween baby!’ she gushed in her caption.

‘Celebrating you is the greatest thing we get to today my love. You make our lives brighter everyday and I feel so lucky to be yours and for our kids to have the best daddy! Happy Birthday to our whole world!’

Jennifer and her smoldering husband first became an item in 2012 while they starred on the Lifetime show The Client List.

She announced their engagement the following June, and a day later her representative told People that she was pregnant.

In November 2013 she welcomed her daughter Autumn, and as that news went public an Us Weekly source said Brian and Jennifer ‘got married recently in private.’

Two years later the couple welcomed their son Atticus, who like his big sister was given the middle name James.